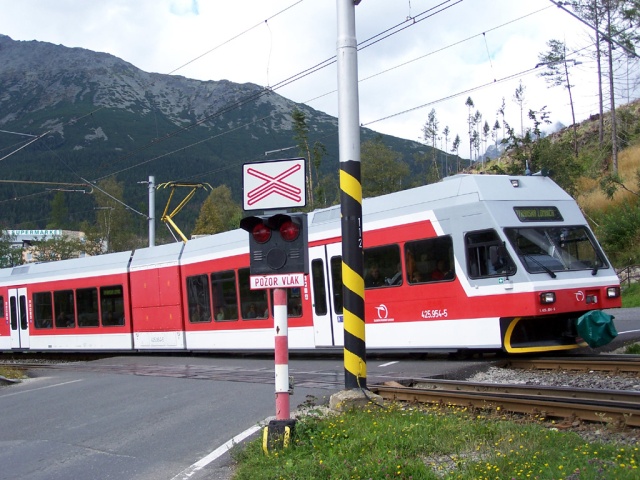 PLEASE NOTE THAT THERE IS AN UPDATED VERSION OF THIS POST ON OUR BRAND NEW SITE, WWW.ENGLISHMANINSLOVAKIA.CO.UK – CHECK IT OUT!

The trains that run between Poprad and the High Tatras mountain resorts are more than a means of getting about: they are an experience in themselves. I, being quite passionate about public transport, am a huge fan of a transport network that not only gets you from A to B but also does so via beautiful mountain scenery, and runs reliably throughout the day, every day. It’s something not all visitors would necessarily know much about and I have the selfish motivation that detailing the route/logistics also helps link up many of my posts on the mountains and makes them make more sense. So find everything you need to know about the route, known variously as the Tatras Electric Railway, the Tatras Mountain Railway or indeed in Slovak as Tatranská Elektrická Železnica below.

From the mainline station of Poprad Tatry there are essentially three lines running: from Poprad via Starý Smokovec to Štrbské Pleso; from Starý Smokovec to Tatranská Lomnica and from Štrbské Pleso via Tatranský Liesovec to Štrba  (at the mainline station of Štrba you change for the regular, frequent trains back to Poprad). This means that you can do a loop from Poprad up into the mountains (changing at Štrbské Pleso and then again at Štrba) and come down again a different way – all on this railway line.

It’s the least complicated way of getting up into the mountain villages which are the base for all those exciting High Tatras activities (hiking, ice climbing, caving, skiing, whatever). Arrive in Poprad Tatry mainline station; walk up to the Tatras Electric Railway departure point, voila. Of course, there are also buses from the bus station quite near the train station, but the schedules take some finding and are not as dependable as the trains. The trains are also just as cheap: although no quicker and often slower in actual speed.

The Price of the Tickets

For the journey from Poprad to Štrbské Pleso which is the maximum distance you can do without changing on the Tatras Mountain Railway tickets are 2 Euros one-way. The journey from Poprad to Starý Smokovec or Tatranská Lomnica (less distance) will be 1.50 Euros one-way. Štrbské Pleso to Štrba is only 1 Euro but if you want to go back to Poprad via Štrba it will be 2 Euros.

Frequency of the Trains

If you’re a first-timer, you can buy your ticket at Poprad Tatry station in the main ticket office. You always have to remember to validate this ticket on board. Most other stations on all three routes also have ticket offices, and ticket machines (which accept Euro coins only). If you imagine a line with Štrba at the western end and Poprad at the eastern end and then – in the mountains above – Starý Smokovec almost parallel with Poprad towards the eastern end of the mountain range (and Tatranská Lomnica, indeed, further east) with Štrbske Pleso parallel with Štrba towards the western end of the mountain range. There: you hopefully have a picture in your head now.

Where to Stop and What to Expect (Main Stops are Bolded and Underlined, Noteworthy Places Just Bolded)

Starý Smokovec is perhaps the main mountain resort village (although Dolný Smokovec just before it also has decent accommodation). Still, it’s Starý that has most tourist facilities. Overall it has the feel of an old Victorian-era resort and a lot of it retains its old-world charm. Guesthouses, hotels and restaurants a-plenty. From Starý Smokovec there is a cable car up to Hrebienok where you can link up with the Tatranská Magistrala (Stage 3) an hour’s walk south of Englishmaninslovakia’s recommended stage 2/stage 3 stopover, Zamkovského Chata*.

Tatranská Lomnica (east from Starý as previously described) is another fairly pretty village with plenty of accommodation options. From here you can also take the cable car up to Štart and then onto Skalnaté Pleso* (watch out for another post on this mountain lake soon) at which point you are on the Tatranská Magistrala (Stage 2). At Tatranská Lomnica you can also get fairly regular buses onto the village at the very eastern edge of the High Tatras, Ždiar – which is where you can also start the Tatranská Magistrala hike.

Heading west from Starý Smokovec there’s a few more stops which are of no major interest to the majority of visitors (except as start points for hikes – but there’s too many of those to detail here) before arriving at Vyšné Hágy, where there’s a back route to link up with Tatranská Magistrala (Stage 3, but little else besides a sports pub.

The final stop on the Poprad to Štrbské Pleso line (Štrbske Pleso unsurprisingly) is one stop further beyond Popradské Pleso. It’s the least appealing of the mountain resort villages. The lower parts around the train station have been destroyed a tad by development (although there’s a great cafe here, Furkotka – I’ll write about it some day) but up by the lake it’s still a very serene and beautiful place. There are several hotels here and of course the ski developments. In the High Tatras, Štrbské Pleso is probably the best – or at least the most popular – place to ski. Read more about Štrbské Pleso as it features on the final stage of the Tatranska Magistrala (Stage 4) but remember about the trees currently blocking this classic footpath heading onwards to Podbanské. You may well not be in Štrbské Pleso for the hiking and therefore we have additionally prepared this piece on what else there is to do at Štrbské Pleso (a fair amount).

All in all, though, imagine it: this is a commuter train, that ushers you up to some superb mountain getaways. And for a couple of Euros.

GETTING THERE: Well, this post IS about getting there! But you’ll start your ride on the railway, 99% of the time, from Poprad

NEXT ON THE JOURNEY: We’ve said it here already and we’ll say it again: the end of the line on the railway is Štrbské Pleso – great access to the high peaks from here!

* To be linked once the thing is written.

1 Response to The Tatras Electric Railway