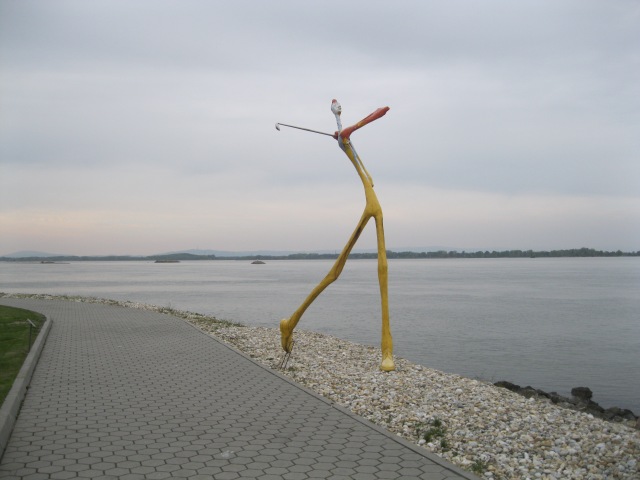 Some of the cool sculpture around the Danubiana Museum

This isn’t my first post about the Danubiana Meulensteen Art Museum (see this post for an example of the type of stunning exhibitions they get here). And, given that a trip here is possibly the best thing to do in the whole of Bratislava, it’s unlikely to be my last. But this post is more about how to get there, and how fun getting there can be.

For those of you not in the picture, the Danubiana Museum is a modern art gallery that’s been created on a promontory of land jutting into the Danube near the town of Čunovo some 15km downriver from central Bratislava. Everything about it from its design to its exhibitions is first-class, and has helped put Bratislava on the map as a sort of boutiquey arts destination. In the years following its opening in 2000, many more funky little art galleries opened in the Old Town. Yet surprisingly few foreigners make it out to the art museum itself. (it’s interesting to note that Danubiana only seems to get Slovak and German Wikipedia entries, and it’s not overly promoted in Bratislava, either, which perhaps partly accounts for it).

Anyway, scroll to the bottom of this entry for pricing info, opening times, and why – post-refurbishment – you just have to get out and see the gallery as part of any sojourn in Bratislava. 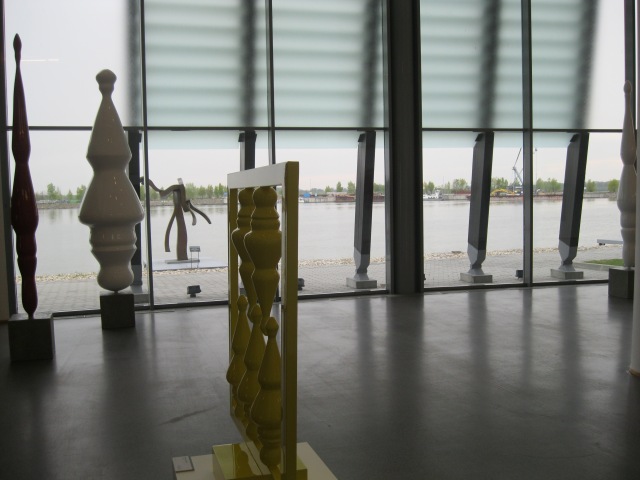 From inside the museum space, looking out at the Danube

But with spring well on the way (at least, Bratislava is bathed in glorious sun as I write this) it’s not just the art that constitutes a reason to go here. It’s the journey itself. Particularly if you’re in the city for just a few days, having a green getaway on one of them is nice. Most visitors choose Devín Castle for that getaway, and rightly so, because that’s wonderful too. But heading in the opposite direction to Devín, i.e. downriver to the museum, is just as tempting. There are three ways you can do it:

1: Hiking, Cycling or Roller-blading along the trails on the Dunaj (Danube)

Cross over either of Bratislava’s two central bridges across the river (well the Košicka bridge is best for your purposes, as you’ll be heading east/south-east, plus there will also be the Starý Most back up and running in late summer 2016) and you’ll see the start of a cycle path that takes you all the way out of the city, close to the course the Danube takes as it wends south to Čunovo and then almost immediately on into Hungary. It’s possible to hike, of course, but cycling or roller-blading are the main ways people do it.

The great thing is that along here there are bars you can rock up to on your skates/bike, stop at one of the picnic tables for a good mix of Slovak fried meat and a frothy beer, then continue on your way. As I’ve said, it’s probably 15km to Čunovo but it’s really quite beautiful: small lakes to stop at for a picnic just “inland” and, at one point, an old chateau. Patches of old forests and the lakes provide cooling off opportunities, as it gets very hot here in summer.

One possibility for bike hire is Bike Bratislava, located near the Downtown Backpacker’s Hostel. Hire will cost in the region of 15 Euros per day for adult mountain bikes. Or, try Bratislava Bike Point, a newly-introduced-in-2014 service based under Most SNP (on the Petrzalka side) of the Danube.

2: A Boat Trip Down the Danube (Dunaj) From Central Bratislava

These trips don’t run all the time: just Saturdays and Sundays from May through to the end of October. Take the boat trip, and you get free entry to the museum at the other end. It’s also an amazing experience to see Bratislava from the water, and as you wind out of the city you’ll see lots of the river that it’s impossible to glimpse from the cycle paths. Departure times are 1:30pm from central Bratislava (get there half an hour or so before). It’s a 45 minute trip to Danubiana. The return voyage is at 4:30pm and it takes 90 minutes as it’s against the current. This gives you a good 1.5 hours to look round the museum, have a coffee in the cafe or peruse the wonderful selection of art books in the shop.

Ticket sales are through Lod (10/6 Euros per adult/child for the boat trip that includes museum entry) but because their website is not abundantly clear I’ll tell you where the departure dock is. Head towards Most SNP (yeah with the spaceship up top) then walk left along the path besides the river.  You’ll see some of the boats they use moored ahead on the near bank. You will have to go to the ticket office first, however, on Fajnorovo 2 (basically, when you can’t go along the river any more bear left around the building impeding you and you’ll see the entrance). This is also where the boats to Devín and Vienna depart, incidentally (I’ll write something else on this later). 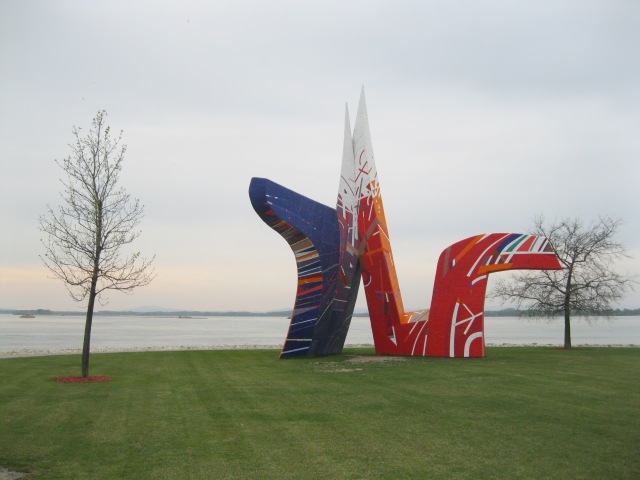 3: Bus From Most SNP to Čunovo

I want to say a few words about this bus, because the museum website and indeed every other source in English says nothing about the logistics of this. On paper it sounds easy enough. Bus number 91 from the station right under Most SNP goes to Čunovo and takes 30-40 minutes to do so. You can also take bus number 91 from Most SNP and change in Rusovce. But these buses stop in the town of Čunovo. And Danubiana, despite having its address listed as Čunovo, is someway outside the town.

So here’s what you do. From where the bus drops you, continue on down the main street until it bends. Directly ahead lies a metalled track which goes passed a few houses on the left into woodland. Keep going. After five to ten minutes this comes out on a road which runs below the raised bank ahead which is the cycle path you could have taken from Bratislava. You won’t be able to get up immediately onto the cycle path as there is a stream in the way, so turn right and follow the road along until it comes out on a larger road. Then bear left, keep the snack stand you’ll see on your left and follow the signs, keeping on the cycle path you’ve now been able to join, which take you out onto the spit of land jutting into the river where the museum is. As a point of interest, you’ll first pass on the right Bratislava’s white water rafting centre, where Slovakia’s multi-medal winning rafting twins, Peter and Pavel Hochschorner, often train. There’s a hotel here too – the Hotel Divoká Voda, but I’m not going to vouch for its quality. It gets a bit blowy up at this wide, wide stretch of the river: bring long sleeves, even in summer.

And at the end of all this, it should be noted that right now Danubiana has REOPENED ITS DOORS following refurbishment. A spectacular refurbishment, no less, and one that puts it easily within the pantheon of Europe’s greatest modern art galleries: see our separate post on the new-look gallery. Best of the current exhibitions? Jan Švankmajer’s Cabinet of Curiousities – which just has to be seen and runs until August 23rd. (date extended due to popularity).

NEXT ON THE JOURNEY: From the Danubiana Art Museum it’s 18km northwest back upriver to Bratislava Old Town, where you can take several other boat excursions on the Danube upriver to Devin Castle and Vienna.