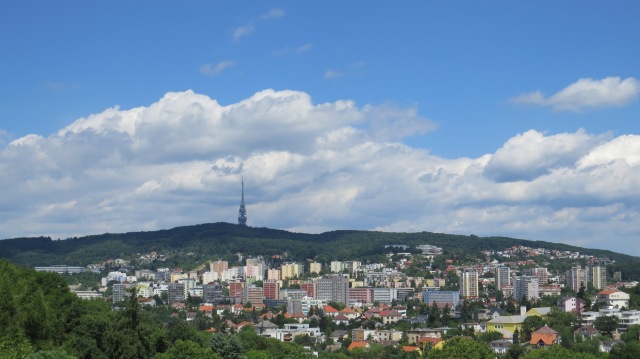 Got to get out of this city… Bratislava skyline from the Štefánikova magistrála ©englishmaninslovakia.com

When I heard there was a path themed around one of Slovakia’s greatest all-time heroes, Milan Rastislav Štefánik, running from the Austrian border at Hrad Devín through the entirety of the Small Carpathians to Bradlo, where the man is buried, my interest was, I’ll admit it, piqued.

The Štefánikova Magistrála is a 120km path in total and encompasses the very best of Western Slovakia along the way – unforgettable forest, several of the most magnificent castles in the country, and – of course – that poignant finish at Štefánik’s tomb.

It transplants you to the pretty, river-hugging village of Devín, invites you on the clamber up to the sandy escarpments of Devínska Kobyla (which, once upon a time not so long ago, protected East from West in Europe), shows you the modern face of Bratislava’s western suburbs, and then, slowly but steadily, those woods and hills – rising only up to 700m (about 2300 feet) but quickly metamorphosing into a little-traipsed wilderness replete with wild pigs and deer. A narrative thread, in other words, linking some of the West’s best tourist attractions.

And part of it runs only about 1.5km away from where I’m living!

The Tatranská Magistrála it Ain’t…

Unlike the Tatranská Magistrála, with all its provision for tourists, including many convenient mountain houses to bed down in, the Štefánikova Magistrála is a different proposition. It is far less walked, and not always as well maintained. Its signage – even at its best – is worse, and often dies out completely. There are no designated accommodation options en route, either – you have to make the best of what is nearby! Perhaps therein lies its appeal: on the Tatranská Magistrála, you will always meet other hikers – here not. Much of this route lies on forgotten paths, only used by local dog walkers or cyclists. True, it lacks the mountainous intensity of Eastern Slovakia – but it is greener and, for leading you astray into increasing isolation, perhaps more beguiling in its own way.

Every Last Bit of the Path (Almost)

Today – a sweltering July day when I needed to get away from my desk – I finally got round to starting this walk. Now, living where I do (Rača) I could have cut up behind my house and been at a point near where I finished today’s stage in a couple of hours – a surefire way to get to the most beautiful parts of the hike sooner. I didn’t do that. I wanted to walk the Štefánikova Magistrála from beginning to end. With such a resolution, I had to therefore go to Devín Hrad (Devin Castle).

The Štefánikova Magistrála According to the Englishman

It’s a somewhat contradictory concept, these paths in the footsteps of famous people. You want to believe, mid-tramp, that yes, it’s OK, Štefánik (in this example) really was sweating it out on these very paths. But of course there is that growing suspicion in the back of your mind that the route planners just want to take you via as many showcase sights as humanly possible. This suspicion grows within you mighty quickly on the Štefánikova Magistrála. Circuitous would be describing this path mildly. Therefore, what follows in the stage descriptions is the Štefánikova Magistrála according to Englishmaninslovakia, with shortcuts inserted where following the path would be an illogical detour.

A Final Few Things About Štefánikova Magistrála on this Site

This route also takes you from the castle walls of Devín (which, in a symbolic gesture, I felt I had to touch before I could get on with the walking thing). If you want to cut straight to the serious woodsy part of this hike, you might want to skip Stage One (to follow this post) and pick up from the start of Stage Two at Hotel West, by Kamzik.

We’ve tried to divide each stage of the Štefánikova Magistrála into five to seven hour walking days, with accommodation possibilities at the end of each. Especially with the first stage, there are a fair few sights to see that should (quite rightly) detain you, and there is a lot of steep ups and downs, plus the highest chance of getting lost (for reasons that will become apparent) – so we’ve given you an easy first days’ hiking!

Finally – getting there. The easiest way by public transport to Devín is to go to the Most SNP bus station (under the bridge) and take the hourly 29 bus which goes straight to the castle forecourt.