Drinking Like A King: Visiting the Tokaj Wine Cellars of the Far East

Mmm. Culinary adventures. What better way to explore than one which has as its motive the discovery of a food or drink? I don’t just say this for my own palate’s sake. In a country I care about, it is also a beautiful thing to see a product flourishing which is a distillation of the land – of its peculiar soil, of its history. Scotland has whisky. France has cognac. Portugal has porto. Slovakia has its Tokaj wine.

Before we get started, it’s Tokaj. Not Tokaji like the Hungarians spell it. Not Tokay, as the word usually gets Anglicised. No: Tokaj is the Slovak wine region.

And just because this rather unique wine first shot to prominence whilst Slovakia was part of the Hungarian Empire, don’t be fooled into thinking Hungary’s Tokaji wine is the superior product and Slovak Tokaj just a humble cousin.  Far from it. The Hungarians are better at promoting the wine on their side of the border to an international market, but that’s also because the Slovaks are quite happy keeping their Tokaj to themselves – much like the Cubans don’t export their very best tobacco.

As for the taste, I’ve tried Tokaji/Tokaj in Hungary and in Slovakia. And certain Slovak Tokaj’s easily out-trump the more numerous Hungarian Tokaji wines. In Hungary, the Tokaji wine region is much larger. The wineries are larger, and more commercial. In Slovakia, Tokaj is still a niche product. It’s produced in far smaller quantities. And going to see one of the wineries is a far more intimate, adventurous and unique experience.

What’s So Special About Tokaj?

Before you make the somewhat epic (at least by Slovak standards) trek out here you should know how special – indeed elusive – is the object of your quest.

In truth, whether it hails from Hungary or Slovakia, Tokaj is a pretty singular drink – already distinguished from most other wines by its distinct amber colour. It’s a desert wine – and quite sweet, but also with a richness desert wines often lack. But it’s how it acquires that taste which sets it out from the overwhelming majority of other wines.

Tokaj grapes get picked only when the vines have been attacked by mould (which the famously moist, volcanic soil hereabouts encourages) and have begun to rot. It’s a bacteria which visits the Tokaj vineyards only sporadically. And when it does, the viticulturists are on hand to convert it into one of Slovakia’s most specialty products – with Protected Designation of Origin status. The mould-attacked grapes called bobula are fashioned into varying concentrations of sugarry paste (distinguished on a scale of “putňa” between 1 and 6, with 6 being sweetest and strongest) and determine the  sweet, pungent taste of Tokaj.

To reiterate, bigger vineyards – such as the Tokaji wineries in Hungary possess – can navigate the problem of sporadic production periods by the extent of the vines they’re harvesting. Most of Slovakia’s Tokaj wineries are small-scale: which underscores the eclectic nature of their product. 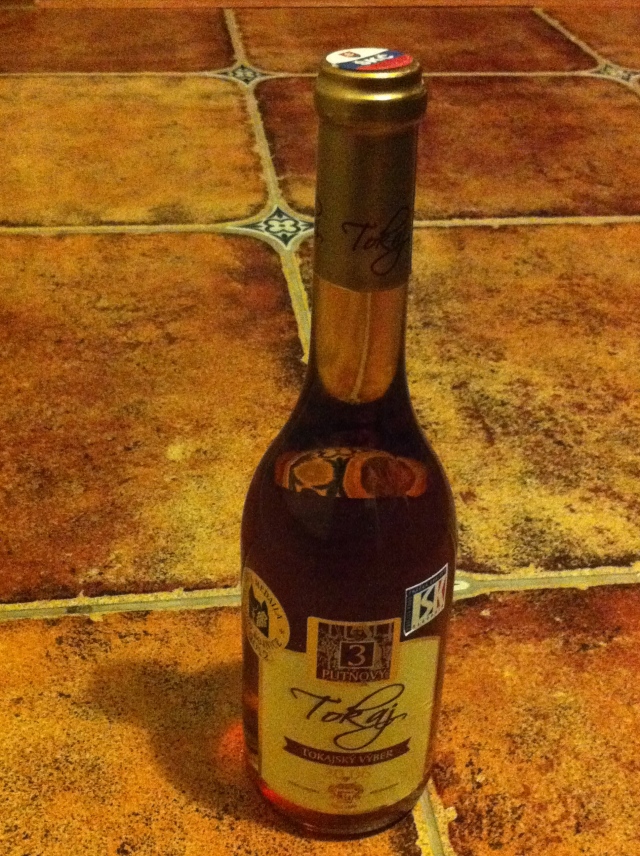 Tokaj wine production goes back several centuries, and involves famous names a-plenty. Charles III of Hungary safeguarded the area as a protected wine-growing region in the 18th century – although wine had been produced here long before that. King Louis XV of France served them to his mistress. Beethoven and Goethe refer to Tokaj in their works.  Perhaps the uniquest thing about the wine, in fact, is that the cellars where it matures were originally 16th- and 17th-century defences against invading Turks: underground labyrinths these days thick with the aroma of fermenting grapes.

This post was in fact prompted by the fact that there was almost no practical information on how to visit the Tokaj wine cellars of far-eastern Slovakia. Slovaks, despite being incredibly self-depracating at times, have a more or less universal quiet pride for their Tokaj, but there’s very much an “it’s there, and we’re happy if only we know about it” attitude that prevails when it comes to visiting the places where their product is made.

Even in the tourist information in Košice, from where a trip to Tokaj terrain commences, they’re hardly forthcoming with details. They’d sooner divert you to one of  the city’s wine bars – and whilst Košice does have several of these, this is not the matter in hand.

Essentially, whilst there is in fact a little-touted Tokaj wine route which takes in several of the villages with cellars (namely Slovenské Nové Mesto, Malá Tŕňa, Veľká Tŕňa, Viničky, Čerhov, Černochov and Bara) this is even more challenging to find good information on than the Malé Karpaty (Small Carpathians) wine route. Wine routes are also impractical, remember, if the distances between the stop-offs require a drive. The best idea with the Tokaj wine cellars is to go and stay overnight in the most atmospheric of the wine-producing villages, Malá Tŕňa (or failing that nearby Veľká Tŕňa).

STAY OVER: Tokaj Macik winery in the village of Malá Tŕňa came up with the bright idea of letting its wine-sozzled visitors crash at their place. There’s eight good, spacious modern rooms here, plus a bar serving more of that Tokaj and wifi. Prices for a single/double are 48/58 Euros.

GALLERY: (courtesy of Around Guides)

Malá Tŕňa is pretty much 100% devoted to winemaking – and has been for centuries. If you are not travelling around Slovakia with your own car then there is a nice way to get here by public transport.

Hop on one of the ponderous, battered old trains that shunt about every two hours from Košice down to the town of Slovenské Nové Mesto (also a winemaking town but less attractive) on the border with Hungary. Walk back up the long straight road running out of town to the first bend. A little-used lane forks right. Take it, and follow this route cross-country through rolling farmland with vineyard-carpeted slopes sliding into view as you pass the hamlet of Karolov Dvor and wind up on the shady main road (appropriately named Tokajská) of Malá Tŕňa. I personally enjoyed this way of arriving as you get to see more of the “winescape” and work up a thirst in the process. It was a scalding summer day on my last visit here, and I was craving the cellar cool by the time I arrived…

As you enter the village, the proper “wine” street (Medzipivničká) is on the left. You’ll see the Greek-style mural in celebration of viticulture and then the Tolkien-esque pitched stone huts built into the earth which mark the entrance to the cellars themselves…

Within Malá Tŕňa, there are several wineries to choose from. All offer similar degustation experiences for $10-15 Euros. You descend 10 metres underground (it’s cold down here – you’ll need a jacket) into a network of underground passages and antechambers that would be incredible to explore even if there wasn’t a drop of alcohol stashed within.

As it is, these endearing labyrinthine buildings are packed to the gills with wine. You’ll see the cosily-lit cellars stacked with wine, with the characteristic bubble-like black mould encasing the walls and many of the bottles. You’ll sit down and be taken through the history of Tokaj (far more in depth and fascinating than any blog post could hope to be) and then you’ll get a long and drawn-out tasting session, generally beginning with the weakest and ending in the nectar-like grade 6 vintage.

The only difference between these tours is that some of the more popular ones can have bigger groups, making the experience less personal.

That said, on the day we made enquiries about visits, none of the wineries – even the biggest – had any visitors at all. This worked to our disadvantage, because to a group of just two, most wineries thought it wasn’t worth opening up (they wanted a 4-person minimum to bother). In the end it was the smallest winery of the lot (a family who had just one cellar and who had been winemakers for generations – the details on these guys will follow in the next day or so) who we found most accommodating – and delivered a beautifully personal experience whereby the owner was happy to chat for a good couple of hours about the complexities of the winemaking process.

WHICHEVER winery you opt to visit (and of course you can visit multiple cellars, but remember that at a minimum of six sizeable glasses of Tokaj per degustation, you might not wish to navigate too many sets of steep, slippery steps) you do need to BOOK IN ADVANCE. Ideally a minimum of 24 hours before, and to be safe two or three days before.

– Tokaj Macik Winery – they offer 6-, 10- or 15-glass tastings (the latter the supposedly “complete” degustation) – prices range from 10 to 30 Euros per person.

So there you go. Enjoy.

WANT TO KNOW MORE ABOUT SLOVAK WINE? SO WHAT NEXT?

–  Our post on Open Cellar Days when you can go round sampling the wines of the Malé Karpaty (Small Carpathians) Wine Route willy-nilly,

– Our posts on Slovakia’s other big wine region, Malé Karpaty (Small Carpathians) around Bratislava: on visiting Limbach, the prettiest of these wine-producing villages and on the tasting events put on by various Malé Karpaty wineries

– Our post on Slovakia’s ten most quintessential food and drinks

NB: this is one of our pages which is constantly in a state of flux – check back for updates on Tokaj wine cellar tours and particularly good bottlings 🙂

2 Responses to Drinking Like A King: Visiting the Tokaj Wine Cellars of the Far East